CCommunities of Korchi, a small Taluka in Gadchiroli District of Maharashtra, India, have collectively made a record-high turnover of over Rs 21 crores in three years by selling tendu leaves. This unprecedented success has been possible through the provision of Community Forest Rights (CFR) titles under the Forest Rights Act, 2006, which provided the community with legal ownership of over 17,514.87 hectares of their community forest area.

Further, the enhanced income generated by tendu business has not only improved the livelihoods of the villagers but has also contributed towards the upliftment of women in their community.  During the last few years, women participation in the tendu collection and management activities has been recognized and encouraged by the community and has thereby empowered them to become independent and enabled them to financially support their household.

The years of transformation

Conventionally, the Forest Department, along with the PESA committee of Panchayat level Gram Sabha carried out the tendu auction and trade. However, this arrangement changed after the community received its title.

In 2011, a total of 87 communities received legal ownership of the forest land and formed the Korchi Maha Gram Sabha (MGS) and decided to collectively conduct tendu auctions.  They took approximately a year to grasp and understand the nuances of the tendu sale procedure before organizing formal auctions.

In 2017, prior to the auction, the MGS exercised their ownership right and substantially increased the royalty and labour charges. Such decision-making power related to governance of the auction was possible only due to the FRA Act (2006).

The communities made a cumulative turnover of Rs 21 crores in a short span of 3 years through sale of tendu. The exceptionally high turnover in 2017 was due to the high demand for tendu in the market. However, the following year, tendu prices dropped, which resulted in a decline in the total turnover. Even during this lean period, the MGS ensured that the farmers and labourers received the maximum share of the final price, making them the principal decision-makers of the trade process. Further, depending on the market fluctuations, MGS distributed a substantial share of the royalty amount to the labourers as bonus. The bonus amount acted as a buffer between market fluctuations and pre-decided labour prices. 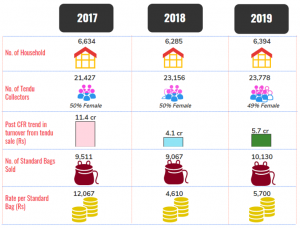 The remarkable turnover is not only owed to conscious governance by the Gram Sabha but also to the high quality of tendu leaves methodically collected by the community. Contrary to general belief, tendu leaf collection is a meticulous process, and the high demand for tendu has led to an increase in the number of tendu collectors.

In 2018, as the trade process stabilized, the community collectively initiated an ambitious plan of making all transactions related to the sale of tendu ‘cashless’ by digitizing the entire process. Legalizing ownership allowed this community to think and act at par with modern businesses and instill entrepreneurial risk-taking capabilities. Unfortunately, the initiative failed in a span of one year due to inadequate support from the government and scarce infrastructure at the village. A total of Rs 3.62 crores was transferred to the bank accounts of 23,156 workers through Real-time gross settlement (RTGS) before this system was discontinued in 2019.

In 2019, the title holding communities applied for Goods and Service Tax (GST) number enabled by institutional support from local Non-Government Organizations (NGOs). The GST for tendu shall come into force from 2020 onwards.

Korchi MGS has continuously made conscious governance decisions to improve community livelihood and build a roadmap towards successful forest management and trade. Some eminent examples:

Community Forest Resource Rights has played a vital role in generating a stable flow of income, increasing employment opportunities and improving the standard of living of the villagers. People of Korchi have demonstrated exceptional entrepreneurial skills confirming their ability to support their livelihoods and welfare of the forest collectively. Their vision is to gradually implement newer initiatives which will expand and stabilize the tendu trade process and reduce the vulnerability of the villagers. They are looking for increased acceptance from the market, the government and the community, asserting their faith in the future of forest-produce business. 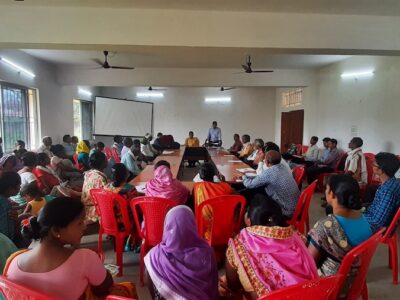 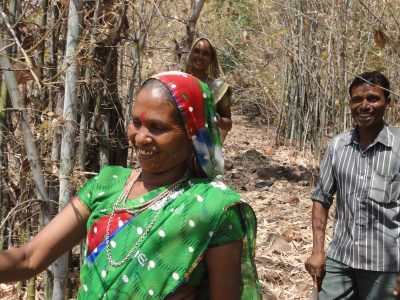 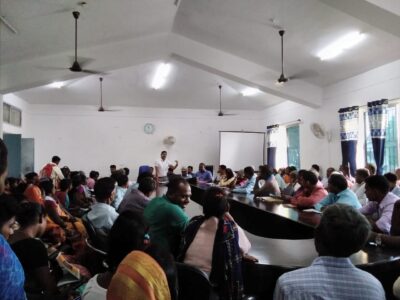